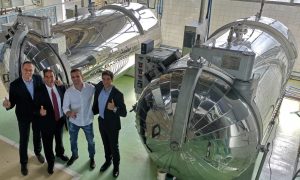 Fabio Santos, President and CEO of SER, noted: “SER has brought many high-quality products to our customers in Brazil and Latin America, especially in the aftermarket for armored glass for automotive applications, and has now entered the architectural market. We specialize in high-quality, high-end products for the most discerning customers. SPD-SmartGlass offers the innovation and performance that our customers demand, and can increase the functionality of armored glass by reducing noise and temperatures inside the vehicle by up to 10ºC, and increasing both comfort and security. Demand is quite high and we currently have a six month backlog of orders for our armored glass and we will be incorporating the SPD functionality right away in the glass we are producing for our best customers. We also plan to quickly expand into other markets and product areas for SPD-SmartGlass.”

Gauzy announced in February that it was building a new state-of-the-art factory line in Stuttgart Germany to produce SPD light-control film for the entire industry.  This factory has the capacity to produce 1 million square meters of SPD film annually. SER is one of the first customers to receive Gauzy’s German-made SPD film, and to become an SPD Certified Partner of Gauzy’s, as part of its Partnership Program for glass fabricators worldwide.

Eyal Peso, President and CEO of Gauzy Ltd. noted: “Our core business philosophy is to work with the finest glass fabricators in the world, with a commitment to providing them with the best materials and training. SER successfully completed our robust training program and became a certified laminator for our high-performing films. We are proud to align with this industry leader, and see Gauzy’s LCG® (Light Control Glass) technology integrated into SER’s expanding product line. We look forward to many successes between SER, Gauzy, and Research Frontiers

Joseph M. Harary, President and CEO of Research Frontiers added: “We are quite enthusiastic about the high sales volumes from this relationship between SER and Gauzy, as well as the focused use of SPD-SmartGlass in the Brazilian market. Armored glass is prevalent here in Brazil, and the use of SPD-SmartGlass technology will enhance the security of vehicles and their occupants by adding tinting that blocks over 99.5% of light instantly and on demand, reduces heat, and provides unprecedented control, and better acoustics and privacy inside the vehicle.”

The markets for SPD-Smart film are already well-established. Research Frontiers has licensed over 40 chemical, film, and glass companies which are selling products for the automotive, aircraft, marine, train, museum, and consumer electronics industries. Gauzy’s established and growing network of over 55 glass fabricators worldwide brings additional synergies, infrastructure, and growth opportunities to the smart glass industry.

Research Frontiers patented SPD-SmartGlass technology is the same best-selling smart window technology that can be found on various car models from Daimler, McLaren Automotive, and other auto makers. The MAGIC SKY CONTROL feature, which is now in use on tens of thousands of Mercedes-Benz SLs, SLC/SLKs, Maybach and S-Class models around the world, and more recently on four announced McLaren models, uses patented SPD-SmartGlass technology developed by Research Frontiers to turn the roof transparent by electrically aligning tiny particles in a thin film within the glass. With the touch of a button, drivers and passengers can instantly change the tint of their roof to help keep out harsh sunlight and heat, and create an open-air feeling even when the sunroof is closed. Glass or plastic using Research Frontiers’ patented SPD-SmartGlass technology effectively blocks UV and infrared rays in both clear and darkly tinted modes, helping keep the cabin cooler, and protecting passengers and interiors while also enhancing security inside the vehicle. These benefits become even more important when a car uses large surface areas of glass, especially in warm climates.

Some of the other benefits of SPD-SmartGlass include significant heat reduction inside the vehicle (by up to 18ºF/10ºC), UV protection, glare control, reduced noise and reduced fuel consumption. Independent calculations also show that use of SPD-SmartGlass can reduce CO2 emissions by four grams per kilometer, and increase the driving range of electric vehicles by approximately 5.5 percent.

Shortly after its introduction into serial production in the automotive industry, SPD-SmartGlass has become standard equipment on many different aircraft, and is also used in residential and commercial architectural applications, in trains, yachts and other marine vehicles, in display applications, and to protect light-sensitive artwork and documents in major museums around the world.

SER Company is a Brazilian leader in the development of technologies and solutions for ballistic cars in the protection and security sector. From transparent to opaque parts, its unique technologies allow the final customers to enjoy a 10-year warranty, which is a unique offering in this market. Always innovating, SER has just become Toyota of Brazil’s official supplier for the ballistic car protection market. The company is located in a 11 thousand square meter facility in São Bernardo do Campo – SP strategically near the Brazilian facilities for major automotive manufacturers  such as Toyota, Ford, G.M, Volkswagen, Mercedes, Scania and others. Learn more at ser-company.com.br and on YouTube and Facebook.

Gauzy is a world leader and vendor of material science and nanotechnology, focused on the research, development, manufacturing, and marketing of technologies which are embedded into and onto raw materials. Amongst Gauzy’s core areas of expertise are Liquid Crystals and SPD, which are used to produce LCG® (Light Control Glass). The company is headquartered in Tel Aviv Israel, with additional offices in Germany, China and multiple US cities. Learn more at gauzy.com, and on LinkedIn, YouTube, and Facebook.

Research Frontiers (Nasdaq: REFR) is a publicly traded technology company and the developer of patented SPD-Smart light-control film technology which allows users to instantly, precisely and uniformly control the shading of glass or plastic products, either manually or automatically. Research Frontiers has licensed its smart glass technology to over 40 companies that include well known chemical, material science and glass companies. Products using Research Frontiers’ smart glass technology are being used in tens of thousands of cars, aircraft, yachts, trains, homes, offices, museums and other buildings. For more information, please visit our website at SmartGlass.com, and on Facebook, Twitter, LinkedIn and YouTube.