Las Vegas, NV – January 7, 2016. Research Frontiers (Nasdaq: REFR) confirmed today that Continental Corporation, one of the world’s top five automotive suppliers, is showcasing its “Intelligent Glass Control” system on a demonstration vehicle at a special event at the Consumer Electronics Show (CES) in Las Vegas from January 6-9, 2016. This vehicle, a Ford Mondeo station wagon, uses Research Frontiers’ patented SPD-SmartGlass technology to enable the glass in all eleven side and rear windows and in the top sunvisor portion of the windshield to change its transparency and darken instantly through electric control signals. This increases passenger comfort, energy efficiency, safety and security. 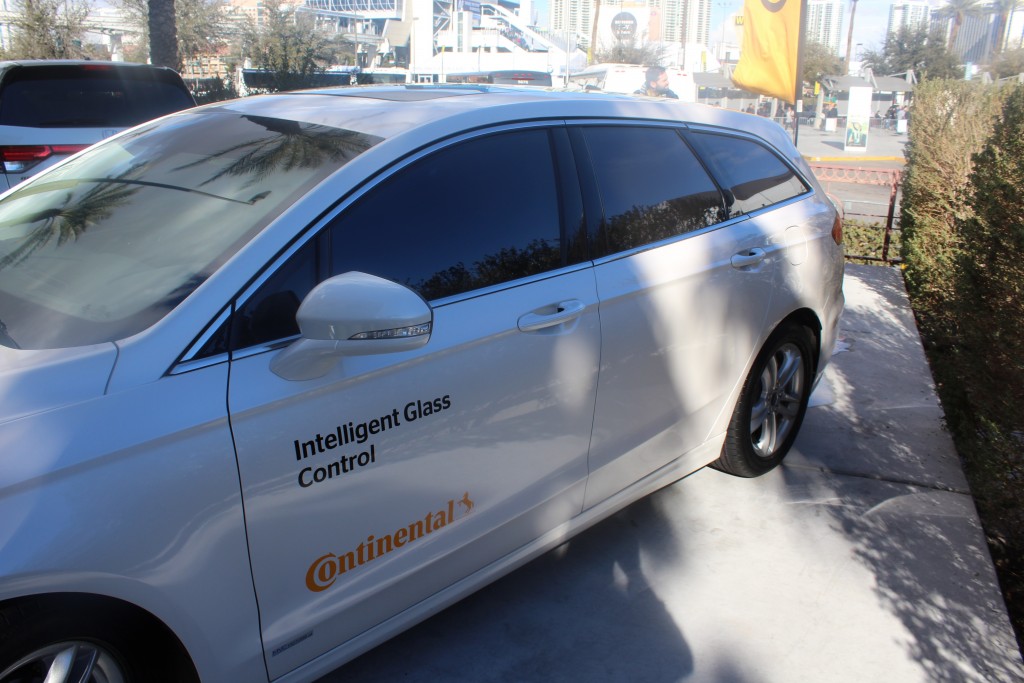 Joseph M. Harary, President and CEO of Research Frontiers, the company which invented SPD-SmartGlass technology and has licensed it throughout the world for use in the automotive, aircraft, architectural, marine and museum industries noted: “Here at CES we are seeing a heightened presence of smart homes, and now with Continental’s Intelligent Glass Control system, truly smart vehicles using SPD-SmartGlass.”

Continental indicated that its Intelligent Glass Control system increases passenger comfort and lowers CO2 emissions by keeping the interior of the vehicle cooler. As a result, smaller, more efficient and lighter air conditioning units could be used. Calculations showed a reduction in CO2 emissions of four grams per kilometer. Continental also estimates that their Intelligent Glass Control system can increase the driving range of electric vehicles by 5.5%. When compared to conventional automotive glass, Mercedes-Benz reported that the use of SPD-SmartGlass significantly reduces the temperature inside the vehicle by up to 18ºF/10ºC.

Continental also highlighted the safety benefits of its Intelligent Glass Control system in typical driving situations such as when the sun is low on the horizon. Normally the driver’s hand instinctively goes from the steering wheel to the sun visor, resulting in both impaired visibility and a brief decrease in control of the vehicle. Continental’s Intelligent Glass Control system can detect this in advance and darken the car windows automatically before the event even occurs.

Continental’s Intelligent Glass Control system also enhances security and privacy. For example, when the vehicle is parked, the windows darken automatically so the inside of the vehicle cannot be seen from the outside. This also protects the interior of vehicles and their occupants from heat, light and UV radiation.

Continental noted that up until now, this kind of variable tinting technology has only been available in the roof area of high-end cars, such as Mercedes-Benz’s Magic Sky Control system offered on the SLK and SL roadsters, the S-Class Coupe, the Maybach, and most recently the popular S-Class sedan. Now, Continental says it is ready to be used on all windows in a vehicle.

Continental ranks among the top five automotive suppliers worldwide. As a supplier of brake systems, systems and components for powertrains and chassis, instrumentation, infotainment solutions, vehicle electronics, tires and technical elastomers, Continental contributes to enhanced driving safety and global climate protection. Continental is also a supply partner in networked automobile communication. The Continental Corporation is divided into the Automotive Group and the Rubber Group, and consists of five divisions. Chassis & Safety, Powertrain, Interior, Tires and ContiTech.

Research Frontiers (Nasdaq: REFR) is the developer of SPD-Smart light-control technology which allows users to instantly, precisely and uniformly control the shading of glass or plastic, either manually or automatically. Research Frontiers has built an infrastructure of over 40 licensed companies that collectively are capable of serving the growing global demand for smart glass products in automobiles, homes, buildings, museums, aircraft and boats. For more information, please visit our website at www.SmartGlass.com, and on Facebook, Twitter, LinkedIn and YouTube.