Geneva, Switzerland – March 3, 2015. Building on the success of the past with SPD-SmartGlass technology, today, Mercedes-Benz launched another S-Class variant with MAGIC SKY CONTROL! The world premier of the Mercedes-Maybach Pullman occurred today at the Geneva Motor Show, one of the largest automotive events of the year. The Mercedes-Maybach Pullman, or just Pullman as it is referred to, is a stretch limousine version of the S-Class. At over 21 feet in length the Pullman is over 3 feet longer than the previously launched Mercedes-Maybach S600, which is 8.1 inches longer than an ordinary long-wheelbase S-Class sedan. Typical of Pullmans of the past, rear passengers sit facing each other with a partition separating passengers and the driver. Customer deliveries are set to begin at the beginning of 2016 with prices starting at around a half a million euros.

The MAGIC SKY CONTROL panoramic roof using patented SPD-SmartGlass technology will be offered as an option and features a sliding and stationary roof that totals over 18 square feet / 1.7 square meters. With the push of a button, the tint of the glass instantly changes from blocking over 99% of incoming light to going significantly clearer than an ordinary sunroof. This creates an open-air feeling and also reduces heat inside the vehicle. The SPD-SmartGlass that makes up the impressive MAGIC SKY CONTROL panoramic roof option on the Mercedes-Maybach S600 and on the Pullman is even larger in total surface area than the roof offered on the S-Class Coupe, which itself is three times larger than the MAGIC SKY CONTROL roofs that are currently offered on the Mercedes-Benz SLK and SL roadsters.

Also making its debut at the Geneva Motor Show, is the V-ision e plug-in hybrid, also with two Magic Sky Control panoramic roofs. The SPD-SmartGlass panels for this concept van were manufactured by Research Frontiers licensee Isoclima under their CromaLite brand of SPD-SmartGlass. The remarkable features of this large roof was noted by Daimler in their press release at the Geneva Motor Show about the V-ision e concept van:

The 1.92 x 1.12 meter panoramic sliding sunroof with MAGIC SKY CONTROL is divided into two sections: an electrically operated sliding glass roof in the front and a stationary glass roof in the rear. The MAGIC SKY CONTROL feature makes it possible to switch the entire glass surface to clear or dark with just the push of a button. When clear, the roof is almost completely transparent and lets in light unobstructed to create a feeling of unlimited expansiveness. When the roof is darkened, the amount of light it lets in falls to less than one percent. This can be very beneficial on hot sunny days, since it reduces the heat that accumulates in the interior by as much as 10 degrees Celsius. The panoramic sunroof is also equipped with a two-piece electric roller sunblind that can be used to completely darken the interior. This not only keeps the interior from getting too hot; it also allows the passengers to work comfortably or relax in the back of the vehicle on hot sunny days.

If the roof is open and it starts to rain, a rain sensor causes the panoramic sunroof to move into the tilt position, thereby preventing water from getting into the interior. The roof also automatically closes when the vehicle enters a tunnel in order to ensure pollutant emissions and tunnel odors are kept out of the passenger compartment. The panoramic sunroof and the roller sunblind can be operated with a switch on the roof control panel, as well as via a central switch on the ceiling in the rear.

First-class comfort is also ensured in the Concept V-ision e when it comes to operating the various features of the panoramic sunroof and the executive seats. Besides the switches inside the vehicle, an iPad app can be used to open and close the sliding sunroof via the MAGIC SKY CONTROL system, as well as to operate the sunblind, adjust seating or reclining positions, and activate the massage, seat heating, and seat ventilation features. The app offers a preview of future possibilities for increasing operating comfort in the rear of the V Class MPV. 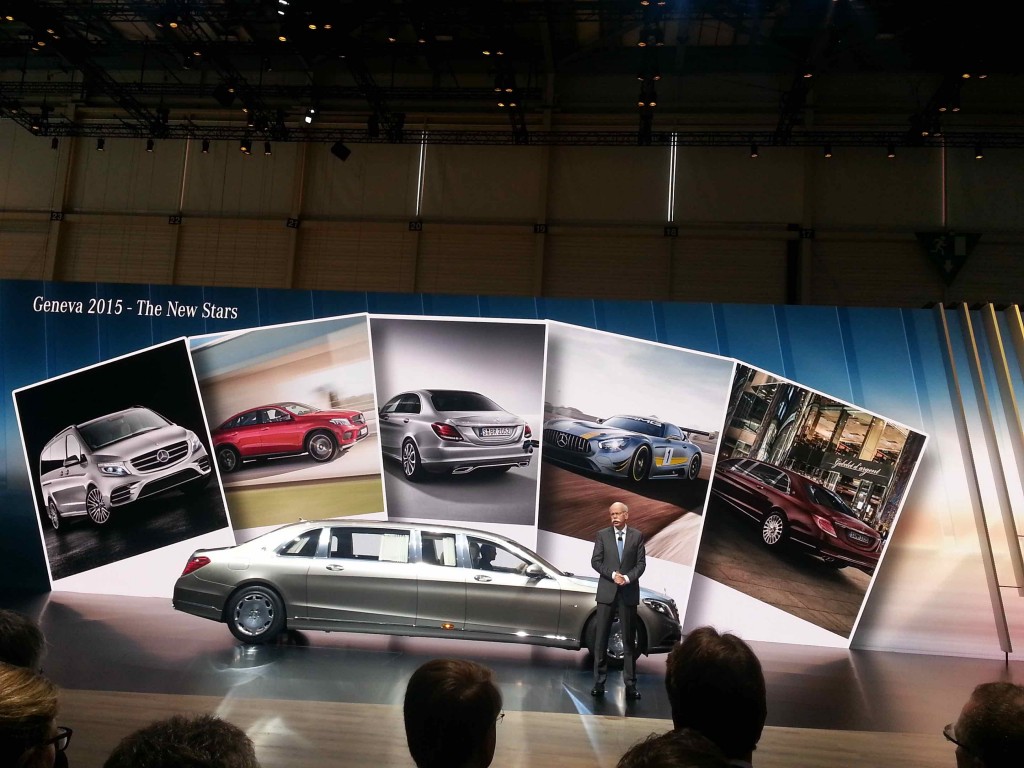 Joseph M. Harary, President and CEO of Research Frontiers, commented after the debut of the new Mercedes-Maybach Pullman at Daimler’s press conference at the Geneva Motor Show: “We are pleased that after being the first auto maker to introduce SPD-SmartGlass on the Mercedes-Benz SLK roadster, followed by highly successful sales of this option on the Mercedes-Benz SL roadster, Daimler has now moved the Magic Sky Control option to coupes and sedans with the S-Class Coupe debut last year, as well as the Mercedes-Benz Maybach which will be available in dealer showrooms in March in China and April in the United States. Now the panoramic Magic Sky Control roof with SPD-SmartGlass technology is being introduced on the top of the line Mercedes-Maybach Pullman stretch limousine, the first OEM limousine to offer this feature. This event marks the 50th Anniversary of the Pullman for Mercedes, as well as the 50th Anniversary year for Research Frontiers, making this a truly special day. Also congratulations to our licensee Isoclima for the remarkable roof system that they supplied the CromaLite brand of SPD-SmartGlass for. The Daimler press release about this illustrates just how advanced this panoramic roof and its controls are, and how they contribute to the best in passenger comfort, productivity and luxury.”

The MAGIC SKY CONTROL feature uses patented SPD-SmartGlass technology developed by Research Frontiers to turn the roof transparent by electrically aligning tiny particles in a thin film within the glass. With the touch of a button, drivers and passengers can instantly change the tint of their roof to help keep out harsh sunlight and heat, and create an open-air feeling even when the sunroof is closed. Glass or plastic using Research Frontiers’ patented SPD-SmartGlass technology effectively blocks UV and infrared rays in either the clear or dark mode, helping keep the cabin cooler, and protecting passengers and interiors. These benefits become even more important when a car uses large surface areas of glass, such as the panoramic roofs on the new Mercedes-Maybach S600 and Pullman, especially in warm climates.

SPD-Smart technology has proven itself in many aspects, from durability and performance, to sales. MAGIC SKY CONTROL is now in use on thousands of SL’s and SLK’s around the world. Before putting cars into serial production, Mercedes-Benz put the MAGIC SKY CONTROL roof using SPD-SmartGlass technology through rigorous durability and performance testing in some of the most extreme conditions on Earth. This included testing in the arctic cold of Scandinavia (with temperatures below -22ºF/-30ºC) and the blistering desert heat of Death Valley, California (with temperatures exceeding 122ºF/50ºC). The MAGIC SKY CONTROL feature using patented SPD-Smart light-control technology allows drivers many benefits including the ability to create the open-air feeling of a roadster. It also blocks over 99% of harmful UV radiation and substantially reduces heat inside the vehicle. Test data published by Mercedes-Benz shows the ability of the roof to reduce sun exposure to 1/20th of direct exposure levels (from over 1,000 watts/square meter to less than 50 watts/square meter). When compared to conventional automotive glass, Mercedes-Benz reported that the use of SPD-SmartGlass significantly reduces the temperature inside the vehicle by up to 18ºF/10ºC. This increases passenger comfort and reduces air conditioning loads, thereby saving fuel and reducing CO2 emissions.

You can see the new Mercedes-Maybach Pullman, the V-ision e van, and other Mercedes-Benz vehicles at the current Geneva Motor Show (March 3-15, 2014) and read more about this vehicle on Daimler’s media site and on www.mercedes-benz.com or by visiting SmartGlass.com.

Research Frontiers is the developer of SPD-Smart light-control technology which allows users to instantly, precisely and uniformly control the shading of glass or plastic, either manually or automatically. Research Frontiers has built an infrastructure of over 40 licensed companies that collectively are capable of serving the growing global demand for smart glass products in automobiles, homes, buildings, museums, aircraft and boats. For more information, please visit our website at www.SmartGlass.com, and on Facebook, Twitter, LinkedIn and YouTube.